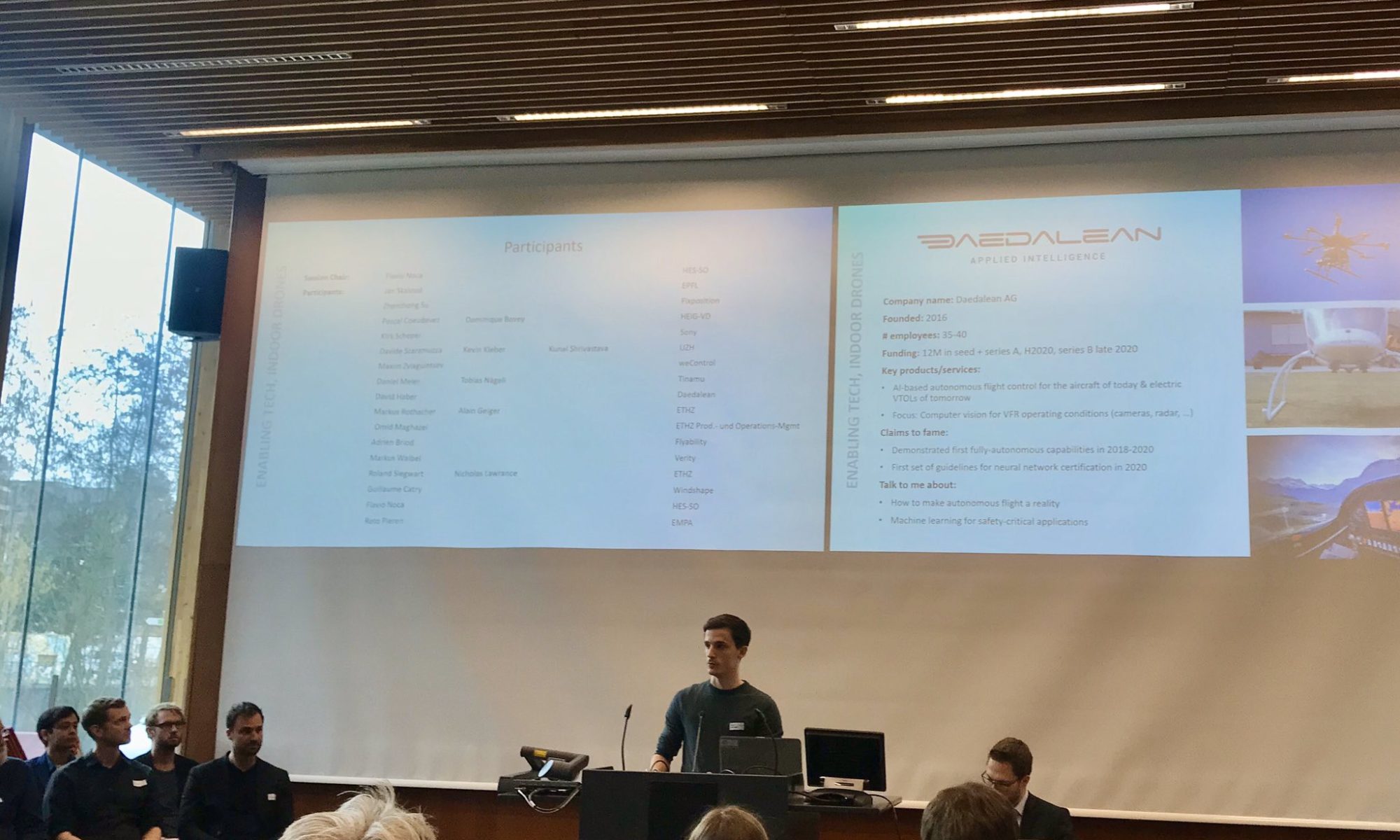 In mid-February we had the chance to participate at the First Swiss drone industry-academia gathering in Bern, organised by the Drone Industry Association Switzerland (DIAS) and hosted by the Federal Office of Civil Aviation (FOCA). The who-is-who of the entire Swiss drone industry and universities were on site. A very compact, highly interesting event! Start-ups and other stakeholders in the field of Urban Air Mobility and eVTOL aircrafts were present too.

Jasmine Kent, CTO and Co-Founder of Dufour Aerospace, gave an update on the start-up from Valais. With the 1:2 scale prototype of their tilt-wing eVTOL they are currently flying inside. Soon the tests will be transferred to the outside. They are currently building up knowledge in the field of beyond visual line of sight (BVLOS) flights and are looking for engineers for further growth.

Tim Dawson-Townsend, Managing Director of Aurora Swiss Aerospace (a Boeing company) demonstrated their impressive experience in the field of eVTOLs. For example, they have played a decisive role in the development of the Aurora Passenger Air Vehicle (PAV). Together with Porsche, they are currently developing a concept for an eVTOL.

David Haber, Head of Machine Learning of Daedalean AG, showed, how artificial intelligence (AI) helps autonomous flight control systems for the aircraft of today and eVTOLs of tomorrow. Not surprising, a key element of UAM’s commercial breakthrough is the absence of pilots, which saves costs and payload. They mainly focus on solutions based on visual flight rules (VFR) conditions and regulations. Backed with 12 Mio. from a Seed and Series A round, supported by Horizon 2020, they currently are planning a Series B for late 2020.

Manu Lubrano, CEO and Co-Founder of Involi SA, presented their technology to detect and manage the increasing low-altitude air traffic. They offer easy to implement solutions, for very light leisure drones to large and fast eVTOLs.

Urban Mäder, CTO and Co-Founder of FLARM (more a scale-up than a start-up), showed their success story in light aviation. Their traffic awareness and collision avoidance technology for the General Aviation is already installed in more than 40 000 manned aircrafts. Thanks to solutions for drones, they play an important role of the safety landscape of Urban Air Mobility.

Lastly, the FOCA as a regulation authority proved that they are very open and already have proactively launched exchanges and initiatives early on.

We are thrilled by these developments and this event has confirmed once again that Switzerland will play an early role in Urban Air Mobility as well as Regional Air Mobility. The sky is the future!